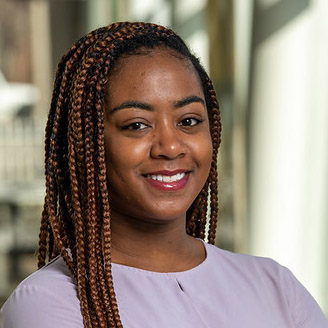 Layla A. Jones (she/her) was a general assignment reporter for Billy Penn from 2019 to 2021. Her work has helped underserved community organizations, earned free repairs for property owners who sustained damages in a police shootout, and brought increased attention to a particularly dangerous North Philadelphia corner. She focuses most on covering Black life, subculture, social politics, and workforce issues.

Previously, she worked as a communications director for Councilwoman Cindy Bass, as a political reporter for the Philadelphia Tribune, and as an arts and entertainment web producer at The Inquirer.
Layla has a journalism degree from Temple University, with a specialization in magazine writing and a minor in political science.

Fashion designer Gianni Lee, a Philly native, made just 76 of the custom pieces.

It’s now an official city holiday (at least through the end of Kenney’s term) but residents have been celebrating Freedom Day for decades.

The ‘Dancing Queen’ rocking U.S. swim trials is from the Philly suburbs

Known for her pre-race dance routines, Sierra Schmidt is hoping to qualify for the Tokyo Olympics.

Billy Penn gives you all Philly news, all day long

Impress your Slack channel with your local news savvy by reading our free morning newsletter, sent out six days a week.

Nonprofit news is a public good

Billy Penn runs our newsroom based on the belief that high-quality information should be accessible to all. If you believe local journalism improves quality of life, will you support our work?

We can’t do this without you

Billy Penn believes local journalism should be free for all, which is why you’ll never see a paywall where an article should be. If you feel the same, will you join us as a member today?

Stories that generate community, not clicks

Your donation supports our mission to make meaningful journalism that’s free for all Philadelphians. Join us as a sustaining member to make sure we stick around.

Powered by the people

As a nonprofit, we depend on sustaining members like you to keep our journalism free for all — we’re so grateful for your support. Know someone who would appreciate Billy Penn? Send them our newsletter!

Mumia Abu-Jamal 101: How he ended up in prison, and why MOVE wants him freed

The former journalist was convicted of killing a police officer in 1981, in a trial many say was suffused with racial bias.

A success story in North Philadelphia: The Modern Republic grand opens on Girard

Police are still investigating what happened, as L&I works to avoid a collapse.

A week that changed Philadelphia: How the George Floyd protests unfolded

The timeline of eight days that will go down in Philly history.

Where to go roller skating in Philly this summer, from outdoor discos to indoor jams

If you don't have your own wheels, you can always rent a pair.

Philly health chief who resigned over MOVE remains to get $2,500 monthly pension

Overall, the city's retirement fund carries the fourth-highest tax burden in the country.

Are the cicadas coming to Philly or not? What to know about Brood X