The Golden State Warriors are competing against the Cleveland Cavaliers for the NBA title, a much better feat than anything the #LOLSixers have done lately.

And to think, the Warriors could be ours. They once were ours. The team originated in Philadelphia in 1946 and then, a start-up before their time, moved to San Francisco in 1962. Even though the Warriors were good, attendance was apparently declining, and owner Eddie Gottlieb sold the team to California investors.

They left us plenty of good memories, though, including NBA titles, Hall of Famers and one of the greatest achievements in scoring history. Here’s a rundown of the Philadelphia Warriors.

Philadelphia Arena: Long before The Center, basketball was played at 45th and Market in University City. The Warriors played here and occasionally in Hershey, at the Hershey Sports Arena.

Paul Arizin 1950-62: Arizin was a Philadelphia native who attended Villanova. When he reached the NBA, he helped transform the game by becoming one of the first players to successfully utilize the jump shot. Arizin averaged 22.8 points per game for his career and is a member of the Hall of Fame.

Wilt Chamberlain, 1959-62: Hardly needs any descriptions. Chamberlain was one of the all-time great players, forcing the NCAA and NBA to change its rules and scoring and rebounding at unprecedented levels. When the Warriors left for San Francisco, he left for just a couple of years before returning to Philadelphia and the Sixers in 1965.

Joe Fulks, 1946-54: Fulks was called the “Babe Ruth of Basketball,” so you know he must’ve been good. Like Arizin, he was a scoring pioneer and to an even larger degree. Fulks, a Hall of Famer, scored 63 points during a game in 1949. This was incredible. At the time, entire teams were lucky to score so much. When Fulks retired he was the second-leading scorer in the history of the NBA.

Tom Gola, 1955-62: Gola is better known for his college career with LaSalle (he’s the NCAA’s all-time leading rebounder) but was also successful with the Warriors, making the All Star team with them three years in a row.

Neil Johnston, 1951-59: At 6-8, Johnston was one of the NBA’s first great big men. He averaged just over 19 points and 11 rebounds for his career and made the All Star team six times.

Eddie Gottlieb, 1947-1955: Gottlieb was the Warriors’ first coach and later its owner until he sold the team away to San Francisco. He wasn’t just a good coach, he helped steer the business-side of the NBA in its early days, helping lead the merger of the Basketball Association of America and the National Basketball League to become the NBA we know today. 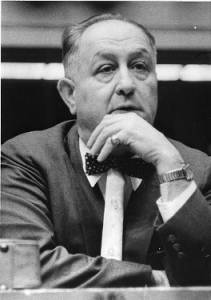 1946-47 championship: This was the first season of the NBA — then known as the Basketball Association of America — and the Warriors won the title. Behind Fulks, who led the league in scoring that year, the Warriors finished second in the Eastern Conference and then beat the St. Louis Bombers, New York Knicks (take that, New York!) and Chicago Stags to win the championship. Against the Stags, they won easily, 4-1. So the first major professional basketball championship belongs to Philadelphia.

1955-56 championship: After Fulks retired, the Warriors jumped right back to the top of the league with the core of Gola, Johnston and Arizin. They beat the Fort Wayne Pistons 4-1 to win the title. Of the team’s 11 players, seven came from Philadelphia colleges.

The 100 point game: Maybe the best-known non-playoff game in NBA history. Wilt Chamberlain scored 100 points in a single game, a record that will probably never be broken. The Warriors won, in Hershey, 169-147 against the Knicks (take that, New York!).

100 acres of horses, pumpkins, and aviators: The history of the Philadelphia County Fair, and its modern Fairmount Park cousin

The sweet potato pie contests in the early 2000s were 🔥.

The former home of the Eagles and Phillies made South Philly neighbors bristle in the 1960s, when the stadium's future relied on an election.

High hopes for the Eagles 🦅

The Roosevelt Boulevard subway could finally happen after a century of false starts, transit advocates say

The Ultimate Made in America Philly Weekend Giveaway

After a rough start, the Phoenix turned their season around — and now face the DC Breeze in a wildcard game.

Did the butterfly heist really happen? 🦋

How is your neighborhood affected by cash bail? The Philly Bail Fund plans to hand you the hard data

Under a new executive director, the group is concentrating on education.

Say farewell to the Northern Liberties alien with big unnaturals, who chilled on a Second Street wall

From family-friendly giveaways to orgs looking for support, your guide to helping local students prepare for learning this fall.

As more development threatens, Chinatown is working to heal the concrete wound that split the neighborhood

“It became extremely apparent that the survivors were really suffering,” said one of the fundraiser’s organizers.

Vogue corrects its guide — without listing a correction ❌

It’s unclear what criteria PPD is using to make the denials, and residents are upset: “You can’t just pinpoint these neighborhoods.”

Plus how to get there on public transit.

Checkers is disappearing from Philly 🍔

Philly culture on a budget: Where to find discounts on arts, nature, and history

Pointers for exploring the city without breaking the bank.

Are Philly’s monkeypox vaccines going mostly to white people? The Health Department won’t yet release data to confirm or deny the rumor

City officials say the sample size is too small to report demographics, but other places do it.

Review: Wawa Shore Tea is the drink everyone at your beach party will agree on

The biggest flaw might be that it’s too easy to drink.
More Billy Penn